A RICH HISTORY OF QUALITY & SUCCESS

The origins of Spear & Jackson can be traced back over 250 years. As early as the 14th century, Sheffield had become a centre for steel tools and cutlery. In the 1740s, a form of the crucible steel process was discovered that allowed the manufacture of better quality steel than had previously been available, and this innovation spurred the growth of Sheffield as an industrial town. And it was not long after – in 1760 – when the foundations of the one of the city’s best known firms, and one synonymous with steel; Spear & Jackson, were laid. It was in this year that a draper named John Love and a Wakefield merchant, Alexander Spear, decided that steel offered a better living than cloth and went into business together. By 1814, the business had passed down to Alexander’s nephew John, who took on an apprentice – Sam Jackson – to learn ‘ye art, trade or mistery of sawmaking’. Sam’s first job was carrying blades from the forge to the grinding wheels yet, by 1830, he had obviously proved his worth as a new partnership was formed – Spear & Jackson. Neill Tools, Spear & Jackson’s parent company, can meanwhile ‘only’ chart a history as far back as 1889, when James Neill, a successful accountant, turned to steelmaking and patented ‘composite’ steel (steel-backed iron) for hacksaw blades. Registering the Eclipse trademark in 1909, Neill started making the world’s first composite steel hacksaw blades in 1911. By 1924, frames had been added to the range and the company introduced the classic shape which all hacksaws now mirror. Fast-forwarding to the 80s, Neill Tools bought Spear & Jackson in 1985, renaming the business Spear & Jackson plc in 1995. But Neill, Eclipse and Spear & Jackson aren’t the whole brand story. 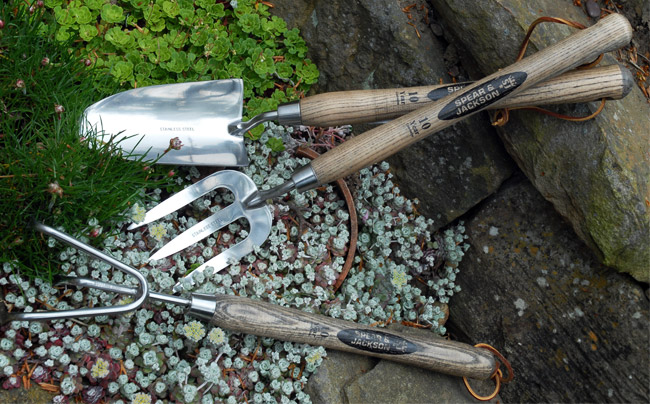 The group also includes the famous WHS trowel brand. Originally known as William Hunt & Sons, WHS is popularly said to stand for ‘Work Hard or Starve’ and – among other things – its 4″ pointing trowels are especially favoured by archaeologists; rows breaking out on the internet whenever another trowel company tries to win the hearts and minds of these ‘time team’ diggers. Also within the company is the well-known Tyzack range of plastering tools. Founded by another Sheffield lad, William Tyzack (1781- 1858); the company really got into its stride through his nephew Joseph. Having developed a profitable working relationship with the Isle of Man Steam Packet Company, Joseph registered the Isle of Man triskelion ‘legs’ – still proudly worn by the company today – with the Cutlers’ Company in 1847. Centuries of experience and innovation have resulted in the materials and development expertise that resides within the company today; and “continuous innovation” is at the heart of the company’s ethos. This drive to improve product materials and performance can be seen in many different ways across the company’s 3,000 lines. The organisation has come a long way since 1760, and the Spear & Jackson Group now manufactures and distributes garden tools, metrology equipment, woodworking tools and magnetic equipment under several brand names: Neill Tools, Bowers, Robert Sorby, Moore and Wright, Eclipse, WHS and Tyzack. With divisions across England, France and Australia, Spear & Jackson distributes products throughout the world.

TThe Ultrafiltrex pipeline separator was showcased at the Energy Exports Conference 2019 in Aberdeen in June, a a major event aimed at supporting the UK supply chain to export products, services and expertise into global markets.

Ultrafiltrex Separator to be Showcased at Energy Exports Conference

Ultrafiltrex will be attending the Energy Exports Conference 2019; a major event opening in Aberdeen this summer aimed at supporting the UK supply chain to export its products, services and expertise into global markets.

Oleum Resources is the latest company to have agreed to represent the UltraFiltrex pipeline filter in India, Malaysia, and Saudi Arabia, an onshore – offshore service company providing services to the Indian oil and gas industry.
We use cookies to ensure that we give you the best experience on our website. If you continue to use this site we will assume that you are happy with it.Accept